FLAC is an open source lossless audio format. Apple chooses not to support it, as they tend to prefer their own propitiatory standards over those that are free and open-source. Such is life in the technosphere of all things Apple.

So how do we play FLAC audio files in iTunes and on iOS devices? One way might be to try and get iTunes on OS X and iOS to support FLAC through some kind of plug-in. I recall there were such things at one time; there may still be plugins for that.

Another option is to go for a FLAC-friendly iTunes alternative media player on OS X and iOS, but that means losing whatever advantages you may find when operating within the iTunes technosphere.

So, the other obvious option is to convert your FLAC files into the Apple Lossless ALAC format. These typically come packaged as .m4a files (but no everything in the m4a format is encoded using ALAC). ACC encoded music can also be packaged up as .m4a files, for instance.

Audio files encoded with ACC (Advanced Audio Coding) can also be packaged within the m4a extension, but then it will be lossy. It can also be packaged as an .acc file, which makes more sense. I understand ACC is considered to be a (mildly) superior and more modern alternative or successor to the somewhat aging MP3 encoding system.

I quote the following from Wikipedia:

Advanced Audio Coding (AAC) is an audio coding standard for lossydigital audiocompression. Designed to be the successor of the MP3 format, AAC generally achieves better sound quality than MP3 at similar bit rates

Whatever the case, it’s still a lossy format and not suitable for people who want, appreciate, and perhaps need an accurate sound reproduction as provided by lossless encoding.

An easy and free solution

So, if you have a bunch of FLAC files, what to do with them when you use iTunes, on Mac OS X and iOS? I’d say the easiest option is to convert them to ALAC

There are some highly rated apps in the App Store that will do this, but most come with a price. Apps like:

A free and useful option I found is Media Human Audioconverter. It provides a full range of options for selecting the sampling frequency and bitrate, and will go between many formats including, as needed here, from FLAC to ALAC .m4a format.

Here’s what the developer has to say about Media Human AudioConverter: 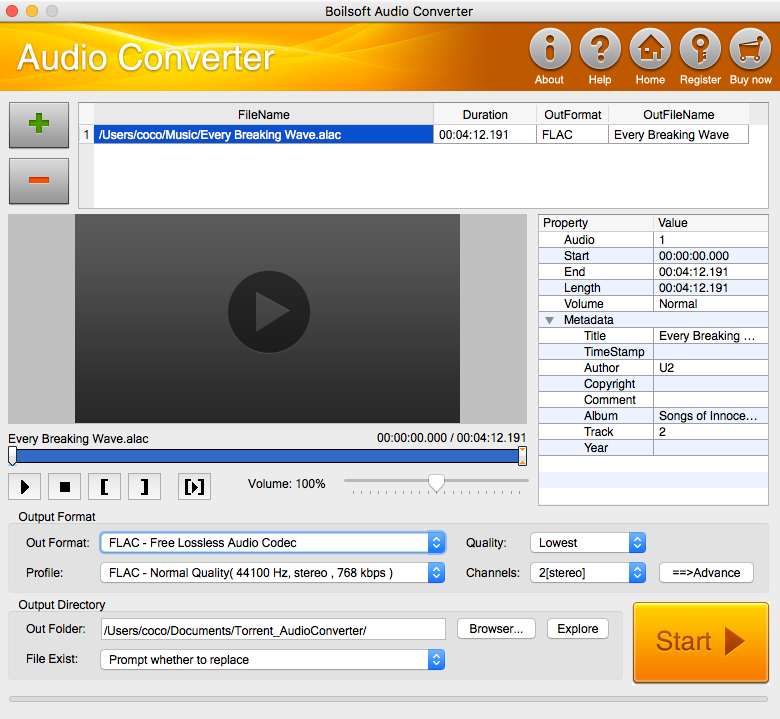 MediaHuman Audio Converter is a freeware application for Mac OS X and Windows. It can help you to convert your music absolutely free in WMA, MP3, AAC, WAV, FLAC, OGG, AIFF or Apple Loseless format.

A little more about improvements of ACC over MP3, in case you’re interested

For your interest, I quote the following on ACC improvements over MP3, from Wikipedia:

Blind tests in the late 1990s showed that AAC demonstrated greater sound quality and transparency than MP3 for files coded at the same bit rate,[2] but since that time numerous codec listening tests have shown that the best encoders in each format are often of similar quality (statistically tied) and that the quality is often dependent on the encoder used even within the same format. As an approximation, when using the best encoders, AAC’s advantage over MP3 tends to be evident below around 100 kbit/s, but certain AAC encoders are not as good as the best MP3 encoder as they do not take optimal advantage of the additional encoding tools that AAC makes available.

Overall, the AAC format allows developers more flexibility to design codecs than MP3 does, and corrects many of the design choices made in the original MPEG-1 audio specification. This increased flexibility often leads to more concurrent encoding strategies and, as a result, to more efficient compression. However, in terms of whether AAC is better than MP3, the advantages of AAC are not entirely decisive, and the MP3 specification, although antiquated, has proven surprisingly robust in spite of considerable flaws. AAC and HE-AAC are better than MP3 at low bit rates (typically less than 128 kilobits per second)[citation needed]. This is especially true at very low bit rates where the superior stereo coding, pure MDCT, and better transform window sizes leave MP3 unable to compete.

While the MP3 format has near-universal hardware and software support, primarily due to MP3 being the format of choice during the crucial first few years of widespread music file-sharing/distribution over the internet, AAC is a strong contender due to some unwavering industry support.[31]